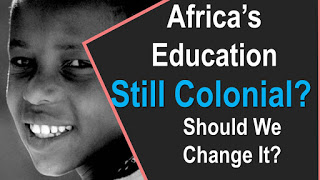 PROVISION OF EDUCATION IN AFRICA AFTER INDEPENDENCE

Education can be defined as a process of transmitting knowledge, values and skills from one generation to another through teaching and training. After political independence many African states inherited the colonial education system which was contrary to their local education system and their environments.

As time went on African independent states adopted the policy of educational expansion and education was considered as a human rights. Following this the number of education institutions like schools and colleges were increased and the system of curricular were modeled. Not only that but also all the education policies focused on re addressing the weakness and objectives of the nation.

OBJECTIVES OF EDUCATION IN AFRICA AFTER INDEPENDENCE

Provision of relevant education to the Africans, independent African states recognized the weakness of the colonial education as it was irrelevant and inadequate in terms of meeting the needs and requirement of the newly created states. Hence they ensured the education provided was relevant to the demands of African countries.

To eradicate education dependence, the African independent states aimed at eradicating the dependence on the European powers so they decided to review the education policy so as to make it suit the African context.

THE FEATURES OF EDUCATION IN AFRICA AFTER INDEPENDENCE

Training of local staffs, the African independent focused on training the local staffs to replace the European expatriates as they were supposed to leave the African continent free governing themselves.

Provision of academic education, since during the colonialism Africans were usually provided with vocational training due to existence of racial discrimination following this African independent state made great efforts to acquire academic education

Provision of free education, many independent African nations provided free education to all school age children who are supposed to be enrolled in primary education. Thus the education was made free of charges as there was no payment of school fees and it was compulsory to all school aged children. This was practiced for the aim of enabling access to education for all Africans.

Revision of curriculum, after independence the curriculum was revised so as to ensure its relevance to the learners. For example in Tanzania there was emphasis on the history of Tanzania, elimination of selection process. Not only that but also teachers training and establishment of new classrooms.

Introduction of education for self reliance, after independence schools were advised to put emphasis on useful values such as equality, honest responsibility, cooperation and community involvement rather than focusing on academics only. A good example for this is Tanzania under socialist ideology.

Curriculum integration, the African schools were asked to integrate work into the curriculum as results students/children could appreciate the value of the manual work.

THE STRENGTHS AND WEAKNESSES OF EDUCATION IN AFRICA AFTER INDEPENDENCE

STRENGTHS OF EDUCATION IN AFRICA AFTER INDEPENDENCE

Expansion of enrollments in both primary and secondary schools.

Freedom of teaching African cultural values and history to the students.

Development of universities in Africa. E.g. in east Africa there was Makerere University, Nairobi University and the University of Dar es salaam.

Reduction of dependence education on outside expatriates.

Improvements of University education in Africa through collaboration between African universities and metro pole universities following the quality of education are being harmonized.

The increase of literacy rate in African countries following the compulsory and free education program. E.g. in Nigeria the rate of illiteracy rise.

Expansion of education facilities due to citizen support. E.g. the Harambee or self-help effort in Kenya.

WEAKNESSES IN THE EXPANSION OF EDUCATION IN AFRICA AFTER INDEPENDENCE

Lacks of experience on vocational courses, the academic teachers was having no experiences in teaching practical courses like agricultural courses.

Problems in using English language in secondary and higher education as medium of instruction this is due to the use of Kiswahili language as a medium of communication in primary schools as a result student failed to communicate in English when they are in higher education.

Gender gap, most of African literacy were men this inherited from colonialism where girls were left aside without enrolled in school as a result even after independence there were higher rate of illiteracy among women than men especially in the higher levels of education.

Under development in higher educational institutions especially from 1980’s due to provision of inadequate resources to support higher education for example lack of enough library materials and laboratory equipment since independence.

Unemployment, most of the university graduates was facing the problem of being unemployed due to few employment opportunities.

Shortage of teachers, especially after independence this was due to higher enrolment of pupils in primary schools and few teachers training colleges existed.