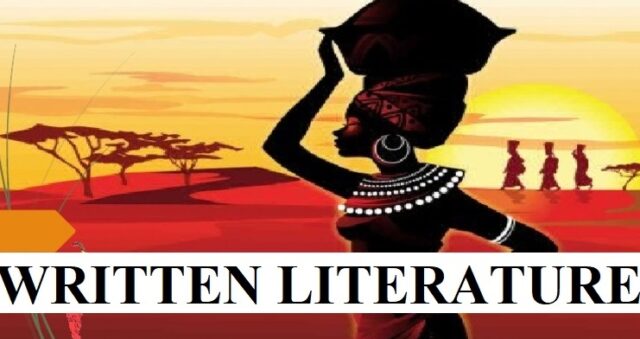 This is a type of literature that presents the message through/ in written form.

This began with the invention of writings.

This has two major forms. Fiction and non-fiction

This is a kind of literature that deals with factual materials or events.

The people written about in non-fictions are real.

Literary non fictions are written to be read just the same way as fictions. These include;

Autobiography. This is an account of someone’s life and experiences written by himself/herself.

The person may choose to tell about an important event from his/her life or tell the whole life story up to the time when it is written.

Autobiographies are almost always written in the first person I.

Example; “Gifted Hands” by Ben Carson and “The Narrative of Frederick Douglas: An American Slave. Written by himself.

Biography. This is a story of someone’s life and experiences written by another person.

In biographies the author may choose to interview the biographical subject and also gather information from other sources.

The subjects of Biographies are often famous people.

A biographer is one who writes, composes or produces a biography.

Essay. This is a short piece of writing in which the writer shares his/her point of view about a certain subject.

Or is a short work of non-fiction that usually deals with a single subject. Essays can be classified as formal and informal, personal or impersonal.

A formal essay is highly organized, thoroughly researched, and serious in tone.

An informal essay is lighter in tone and usually reflects the writer’s feelings and personality.

Informational articles. These are articles that present factual materials about a specific subject.

They appear in newspapers, magazines, and in reference books like Encyclopaedias, almanacs, and atlases.

Nonfiction is broken down into four kinds of writing.

 Exposition. This is a writing that explains something or gives information about a topic.

 Persuasion or argumentation. This is a writing that attempts to convince you of something by showing you that the statement is true or false.

 Description. Is a writing that helps you to form a clear mental picture of something.

Writers use specific details such as shapes, tastes, sounds and textures to help you form the picture.

 Narration. A writing that tells a story of an event or series of events.

There are three parts to most nonfiction writing.

It tells you the main ideas of what the piece is about.

It may also give background material or state a problem.

It shows that the work is ended.

The conclusion may restate or summarize the author’s main ideas, it may answer the question raised in the work or it may urge the reader to future actions.

It is a kind of literature that deals with non factual materials or events.

Characters, setting and events are the product of imaginations from the author.

It can be inspired by the actual events or completely made up.

It is a specifically imaginative work that includes short stories, novella and novels.

This is a story usually about imaginative characters and events that is short enough to be read from the beginning to the end without stopping.

It is also a brief work of fiction that can generally be read in one sitting.

It usually focuses on one or two main characters that face a single problem or conflict. E.g. The voter by C.

Achebe, Ajaiyi and the Witchdoctor by A.

ELEMENTS OF A SHORT STORY

There are four basic elements of a short story.

These are; Setting, plot, characters and theme.

Short stories differ from the novel in its treatment of these four elements. The main difference is partly dictated by length.

In short stories characters are usually not fully developed and usually centre on one idea.

NOVELLA. This is a fiction work that is longer than a short story but shorter than a novel.

It is longer than a short story but the characters are not fully developed as in novels.

In this episode the unnamed narrator, who spends most of the time lying prostrate on a park bench, begins to feel his privacy threatened by the visitations of a woman to the same bench.

NOVEL is a work of fiction that is longer and more complex than a short story.

Or it is a fictional prose usually consisting of more than fifty thousand words. (Probst, et al, 2000).

In novels, setting, plot characters and theme are fully developed in great details.

Like a short story the novel has four main elements, setting, plot characters and theme.

A person who writes novels is called a novelist E.g. Passed like a shadow by B. Mapalala.

The Interview, by P. Ngugi, etc.

Is a literary genre that tells a story through actions and dialogue and is written to be performed on stage by actors.

Drama has the same elements as those in novels and short stories. i.e. setting, plot characters, theme, climax, conflict, symbolism, etc. An element that is unique to drama is DRAMATIC TECHNIQUE. This includes:

 Dialogue. These are the words that the characters speak in a play.

It is a conversation between characters.

It is the dialogue that reveals the character’s qualities, personality traits, and reactions to other characters.

 Soliloquy/monologue. This is a speech made by a character when he/she is alone on stage.

Or it is a speech in which a character alone on stage, expresses her thoughts and feelings aloud for the benefit of the audience, often in a revealing way.

 Aside. This is a direct address of the audience by a character. The other characters do not hear what is being said.

 Stage direction. These are the instructions/notes included in a play/drama which describe how the work is to be performed or staged.

They indicate areas of the stage in which actors sit, stand, move, speak, exit, enter, and so on, lighting, music, sound effect, costumes, emotional state, etc.

These are typed in italics and enclosed in the parentheses or brackets.

It is a serious drama/play with a sad ending especially one in which the main character dies.

The events in a tragic plot are set in motion by a decision that is often an error in judgment.

Succeeding events are linked in a cause-and-effect relationship and lead inevitably to a disastrous conclusion, usually death.

E.g. Oedipus the King, by Sophocles.

A person who writes tragedies for the theatre or an actor in a tragedy is called a tragedian. E.g.   Sophocles, Shakespeare, etc

It is a dramatic work that is intended to be funny, humorous and usually ends happily with a peaceful resolution of the main conflict.

To achieve a comic effect sometimes the playwrights use Mistaken identity.

Sometimes certain characters are mistaken about their surroundings.

The resulting confusion results to a silly series of events. The confusion of characters causes a ridiculous conflict.

The climax arrives when the characters learn the truth. E.g. Juliette and Oko or Atangana and Abessolo in Three Suitors One Husband.

Other examples of comedies are The trials of Brother Jero and The Lion and the Jewel both by W. Soyinka

An entertainer who makes people laugh by telling jokes and funny stories is called a comedian/comedienne.

It is a dramatic work that combines the elements of tragedy and comedy but here the hero/heroine does not end in danger or death.

A comic relief is a technique used to achieve this effect. This is a humorous scene that is inserted into a serious work of drama to provide relief from the seriousness felt by the audience.

A play that is full of exciting events and in which the characters and emotions seem too exaggerated to be true/real.

It is accompanied with a melody –hence melody drama (melodrama)

This is a type of drama that expresses the history of a particular society but usually contains some elements of tragedy and comedy.

 Act. This is a major unit/part of action in a drama or play.

 Scene. This is a smaller section or a subdivision of one act. So a scene is a section presenting events that occur in one place at one time.

 Costume. The clothes worn by actors in a play or film/movie or worn by somebody to make them look like somebody or something else. E.g. a student, a housemaid, a judge, etc.

 Prop. A small object used by actors, during the performance of a play or in a film/movie

 Audience. Is a group of people sitting in a room, auditorium or in the theatre listening to and watching a performance.

 Theatre. This is a special building or an outdoor area where plays/movies/films and other entertainments are performed.