Trans -Saharan trade was a trade that involved West Africa and North Africa across the Saharan desert.

It is a good example of the regional or long distance trade that was conducted in Africa basically in West Africa.

This trade started in the 4th c and come to develop much in 7th The trade started to decline from the 13th c and at the end of 15th c it totally declined.

The trade had several impacts in the history of West Africa and Africa in general.

-It involved the Soninke, Mandika, Yoruba, Fulani, Hausa and others.

-It involved the Arabs, Berbers, Tuareq and others.

It the interior (forest) of West Africa, the goods were gold, silver, animal skins, ivory, bee-wax, honey and other valued goods were obtained

From North, the Berbers and the Arabs brought simple manufactured goods for examples beads, glassware, firearms and other ornaments.

In Sahara desert salt was obtained from Taghaza, Fez and Bilima. The main means of transport during this trade at the beginning was donkey, horse and sometime walking on foot. But later from the 7th c, camel was introduced by the Arabs who arrived from Middle East and started to be used as a major means of transportation through the Sahara Trade.

THE ORGANIZATION OF THE TRADE

The trade was organized in caravan routes which started from all directions of West and North Africa across the Sahara desert. The routes were as follows:

The route started from Sijilmasa and Fez in Morroco. Then it passed through Taghaza, Taoden, Walata, Audaghost, Kumbi Saleh to Timbuktu.

The route started from Tunis and passed to Ghat, Kano and went through the desert to Gao and lastly Hausa land.

This route began in Tripoli and went through to Marzul and lastly finished its caravan route to Bilma. 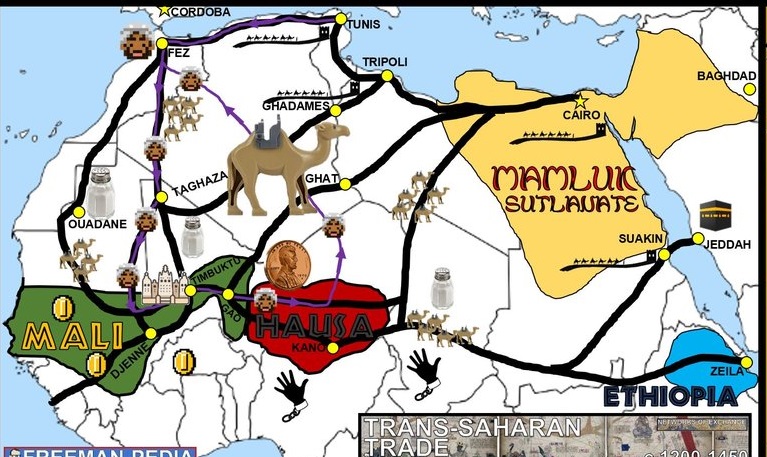 FACTORS FOR THE GROWTH OF TRANS SAHARA TRADE

The growth and development of Trans-Sahara Trade was influenced by a number of factors. Some of the factors for the growth of Trans- Sahara Trade were as follows:

The North and Western states were peace and security with no wars and unrest. This gave room for the development of Trans-Sahara trade.

The location of the area itself enabled the development of the trade. This was due to the fact that West and North Africa situates nearby each other across the Sahara desert.

Availability of commodities in West and North Africa also necessitated the development of Trans-Sahara trade.

Introduction of camel as a means of transport

Presence of Oasis in the desert

These are the areas in the desert with water sources. Presence of these areas made it possible for availability of water for the camels and the traders hence development of the trade.

The coming of the Arabs

The arrival of the Arabs in North Africa especially in the 7th c led to availability of new commodities for examples clothes, food stuffs, camels, guns and gunpowder. At this junction, the development of the trade became inevitable.

Good leadership of the kingdoms

All kingdoms especially in West Africa had good leaders who encouraged the development of the trade. Kingdoms like Ghana and Mali provided good organization of the trade.

FACTORS FOR DECLINE OF TRANS-SAHARA TRADE

By the end of 14th the volume of Trans-lotion trade started to declines. The following were the factors that led to the collapse of the trade.

Many traders abandoned the trade because of the wind which was browning in the desert. These winds made it difficult for the development of the trade.

The invasion of Almoravids

These were the Arabs who came from the Middle East and demanded the spread of Islamic religion in North and West Africa by force. This also made the trade to be unhealthy.

These were wars between the Muslims and those who did not want to follow Islamic cultures especially in West Africa. As a result, the Jihad wars made it difficult for presence of peace and security within the trade routes hence the decline of the trade.

The coming of Europeans

The coming of Europeans in North and West Africa led to development of conflicts as Europeans wanted to spread Christianity and also control some of the routes of the trade. This also contributed to the decline of the trade.

The collapse of kingdoms

The collapse of kingdoms like Ghana and Mali also contributed to the demise of the trade due to the fact that these kingdoms provided good organization of the trade through their leaders who were supervising the traders.

The rise of triangular trade at the end of the 15th c contributed to the total decline of Trans-Sahara trade where the trade shifted to America and Europe.

THE EFFECTS OF TRANS-SAHARA TRADE

The Trans-Sahara trade had numerous impacts both in West Africa and North Africa. Some of those impacts were as follows:

The trade led to introduction of new cultures both in West Africa and in North Africa. Cultural elements like dressing style, foods, language were introduced in the region.

The trade also led to increase of population in West and North Africa due to arrival of Arabs and other people from different parts.

Growth of towns and cities

Trans-Sahara trade contributed to the development of towns and cities in West and North Africa such as Timbuktu, Mandika, Kumbi Saleh,Taghaza and Tripoli just to mention the few.

The trade also led to the spread of Islamic religion both in West Africa and in North Africa where some Africans abandoned their traditional religion.

Intermarriages between Africans from the West and those from the North occurred due to this trade. Also intermarriage occurred between the Arabs and Africans.

The trade also contributed to the growth and development of many kingdoms in North and West Africa. Some of these kingdoms were Ghana, Mali just to mention the few.

Emergence of prominent leaders and traders