The Concept of Heat
Explain the concept of heat
Heat – Is the transfer of energy due to temperature differences.
Temperature – Is the degree of hotness or coldness of a body.
Or heat is a form of energy which raises the temperature of the substance.
SI Unit of Temperature is Kelvin (K).Conversion of centigrade into fahrerinheit given by:f = 9/5ºC + 32
Conversion
of Fahrenheit into centigrade given by C = 5/9/ ( F – 32). Thermometer
used for measurement of temperature. Maximum thermometer is the one
which is used to measure the highest temperature obviously filled with
mercury.
A
Minimum thermometer is used to measure the lowest temperature and it is
filled with alcohol. Combined maximum and minimum thermometer (Six’s
thermometer) is used to measure highest and lowest temperature at the
same time.
SI Unit of Heat is Joule (J) mathematically heat energy given by:
Source of Thermal Energy in Everyday Life
State the source of thermal energy in everyday life
There
are numerous sources of energy such as the sun, fuels, nuclear sources,
geothermal, electricity among others. The most important source of
thermal energy is the sun. The sun generates its energy by a process
called thermonuclear fusion. Most sources of thermal energy derive their
energy from the sun. Thermal energy from the sun makes life on earth
possible.
Difference between Heat and Temperature
Distinguish between heat and temperature
Heatandtemperatureare related and often confused. More heat usually means a higher temperature.
Heat(symbol:Q)
is energy. It is the total amount of energy (both kinetic and
potential) possessed by the molecules in a piece of matter. Heat is
measured in Joules.
Temperature(symbol:T)
is not energy. It relates to the average (kinetic) energy of
microscopic motions of a single particle in the system per degree of
freedom. It is measured inKelvin (K), Celsius (C) or Fahrenheit (F).
When
you heat a substance, either of two things can happen: the temperature
of the substance can rise or thestateof substance can change.
Thermal Expansion of Solids
Expansion of Solids
Demonstrate expansion of solids
When a solid is heated one or more of the following may occur:
Expansion of solids is the increase in dimensions of a solid when heated.
Contraction of solids is the decrease in dimensions of a solid when is cooled.
DEMONSTRATION OF EXPANSION OF SOLIDS
In order to demonstrate the expansion of solid we can use following method
The ball and Ring Experiment
1st Case: When the ball is not heated then it will pass through the ring very easily because it has a small volume. 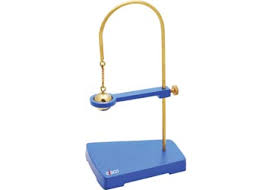 2nd Case: When the ball is heated, it will expand and increase in volume, so itwill not pass through the ring. 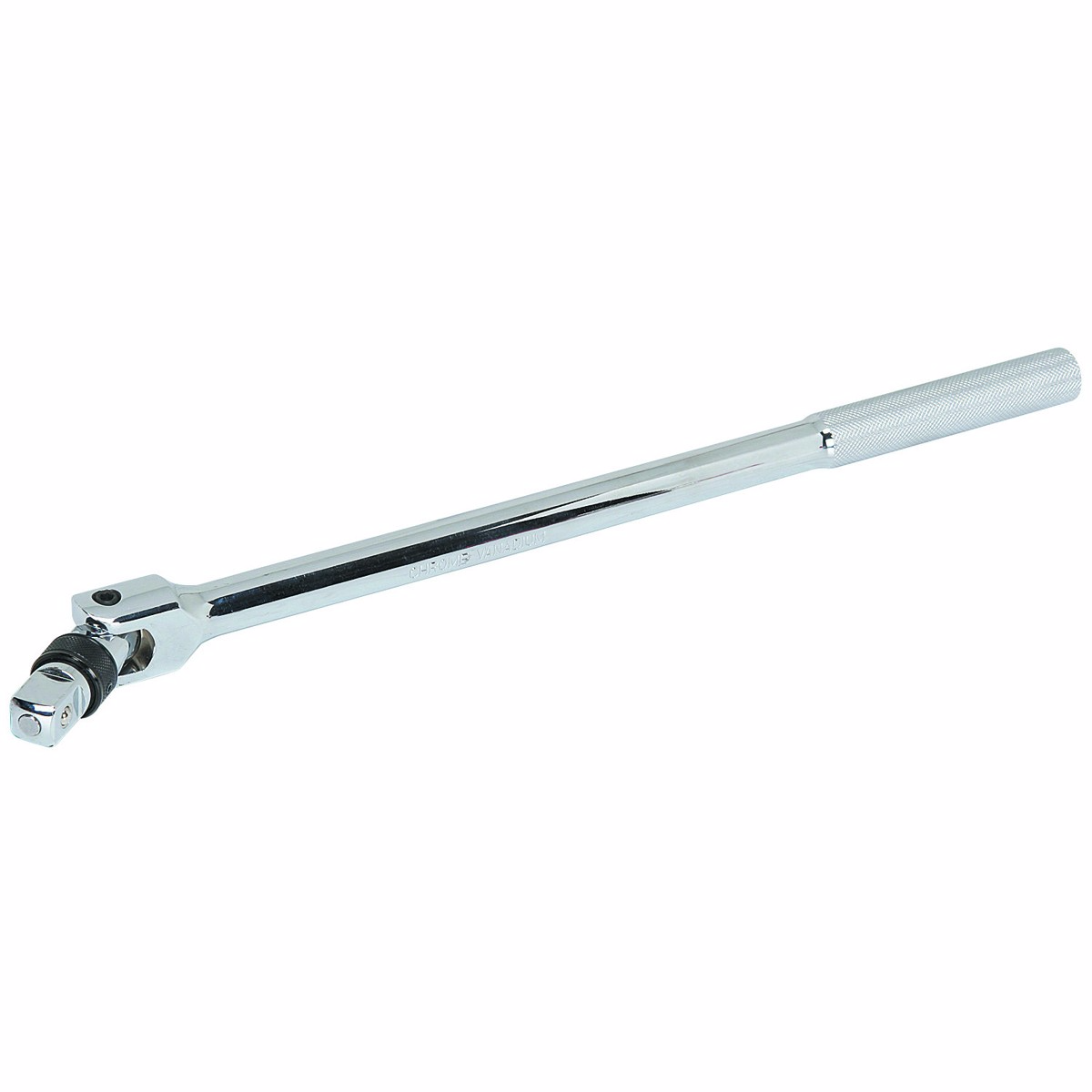 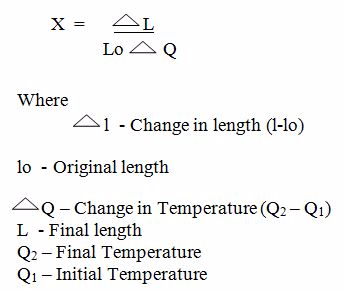 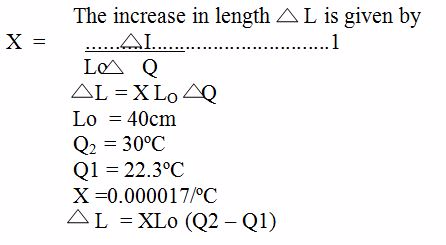 Table which shows the coefficient of Expansivity Constant.
The Application of Expansion of Solids in Daily Life
Explain the applications of expansion of solids in daily life
There
is a large number of important practical applications of thermal
expansion of solids; While laying the railway tracks, a small gap is
left between the successive lengths of the rails. This will allow
expansion during a hot day. The iron tyre is to be put on a wheel, the
tyre is first heated until its diameter becomes more than that of the
wheel and is then slipped over the wheel.
Thermal Expansion of Liquids
The Apparent Expansion of Liquids
Explain the apparent expansion of liquids
Liquids
expands when heated and contracts when cooled. It is easier to observe
expansion in liquids than in solids. Different liquids expand at
different rates in response to the same temperature change. Liquids
expand much more than solids for equal changes of temperature. Apparent
expansion of liquids is always less than the true expansion of the
liquid.
Demonstrate the Effects of Heat on Liquids
Demonstrate the effect of heat on liquids
Liquids
unlike solids can be poured. If a liquid is poured into a vessel, it
takes the shape of the vessel. For this reason a liquid can’t have
linear and aerial expansivity, thus liquids have only volume
expansivity. Liquids molecules have kinetic energy. This energy
increases if the temperature of the liquid is raised by heating. Heating
causes the molecules of liquid to move faster.
Activity 1
Items Needed
Instructions
You can alternatively follow the experiment through the following vedio
Verification of Anomalous of Water
Verify the anomalous expansion of water
The
instrument used to demonstrate anomalous expansion of water is called
hope’s apparatus. it consists of a brass cylinder, jacket J with a
mixture of ice and salt and two thermometers A and B at regular
intervals upward and at the bottom.The hope’s experiment shows that
water contracts as it cools down to 4 degree centigrade and then expands
as it cooled further below 4 degree centigrade.
In
the year 1805, the scientist T. C. Hope devised a simple arrangement,
known as Hope’s apparatus, to demonstrate the anomalous behaviour of
water. 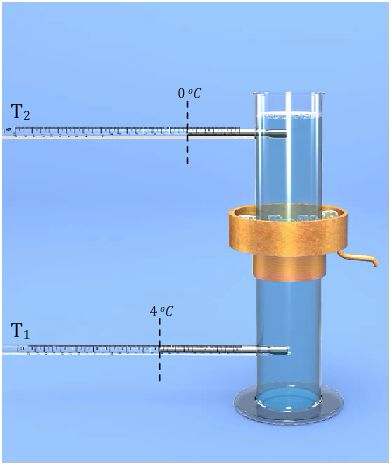 Where,
From
this equation we know that if a fix mass of gas has starting values of
p1, V1 and T1, and then some time later has value p2, V2 and T2, the
equation can be written as:

Exercise 1
Sabah
pumps up her front bicycle tyre to 1.7 x 105Pa. The volume of air in
the tyre at this pressure is 300 cm3. She takes her bike for a long ride
during which the temperature of the air in the tyre increases from 20°C
to 30°C. Calculate the new front tyre pressure assuming the tyre had no
leaks and so the volume remained constant?
Absolute Scale of Temperature
Explain absolute scale of temperature
Absolute
zero is the lowest temperature that can be attained theoretically. It
is not possible to attain this temperature because all gases liquefy
before attaining it. The kelvin scale of temperature is obtained by
shifting the vertical axis to -273 degrees Celsius and renaming it 0 K.
On the scale 0 degrees Celsius becomes 273 K and 100 degrees Celsius
corresponds with 373 K.
Convertion of Temperature in Degrees Centigrade (Celsius) to Kelvin
Convert temperature in degrees centigrade (celsius) to kelvin
The
Kelvin temperature scale takes its name after Lord Kelvin who developed
it in the mid 1800s. It takes absolute zero as the starting point and
temperature measurements are given the symbol K (which stands for
“Kelvin”). Temperature differences on the Kelvin scale are no different
to those on the Celsius (°C) scale. The two scales differ in their
starting points. Thus, 0°C is 273K.
Converting from Celsius to Kelvin
Converting from Kelvin to Celsius
Example 5
The temperature of a gas is 65 degrees Celsius. Change it to the kelvin scale.
Solution
T(K) = degrees Celsius + 273, T(K) = 65+273
therefore T(K) = 338 K.
Standard Temperature and Pressure (S.T.P)
Explain standard temperature and pressure (S.T.P)
The
standard temperature and pressure (S.T.P) is a set of conditions for
experimental measurements to enable comparisons to be made between sets
of data. The standard temperature is 0 degrees Celsius (273 K) while the
standard pressure is 1 atmosphere (101300 Pa or 760 mm of mercury).
Expansion of Gas in Daily Life
Apply expansion of gas in daily life
Land
and sea breezes are the result of expansion of air caused by unequal
heating and cooling of adjacent land and sea surfaces. The piston engine
and firing bullets from guns work under principles of expansion of
gases.