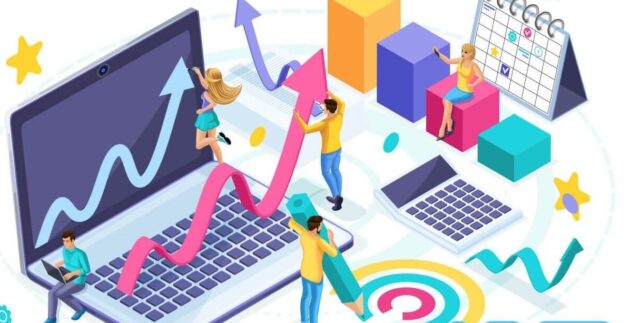 The Basic Characteristics of a Partnership 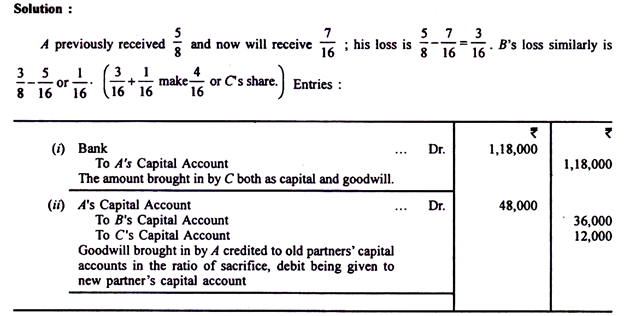 If
the case is that the amount of goodwill is paid by the new partner to
the old partners privately, no entry is passed in the books of the firm.
But the calculations have to be made in the same manner as shown above.
Example 4
Illustration 2:
A
and B are partners sharing profits and losses in the ratio 3:2
respectively. They admit C as partner who is unable to bring goodwill in
cash but pays Rs 96,000 as his capital. The goodwill of the firm is to
be valued at two years’ purchase of three years’ profits. The profits
for the three years were Rs 30,000, Rs 24,000 and Rs 27,000. An
adjustment entry is to be passed for C’s share of goodwill. The new
ratio will be 5: 2: 2. Pass journal entries. 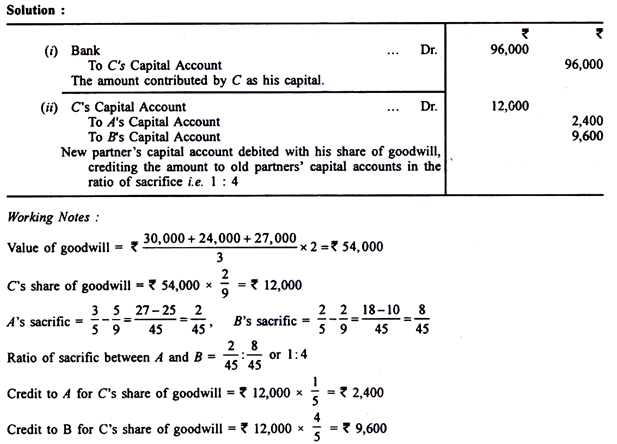 Example 5
Illustration 3:
X
and Y were partners sharing profits in the ratio of 5:4 respectively.
On 1st April, 2012 they admitted Z as a new partner; all the partners
agreeing to share future profits equally. On the date of admission of
the new partner, there was a goodwill account in the old firm’s ledger
showing a balance of Rs 18,000. The current value of firm’s goodwill was
placed at Rs 36,000. Z paid Rs 50,000 by way of his capital. He also
paid an appropriate amount for his share of goodwill. X and Y wrote off
the goodwill account before Z’s admission.
Pass the necessary journal entries. 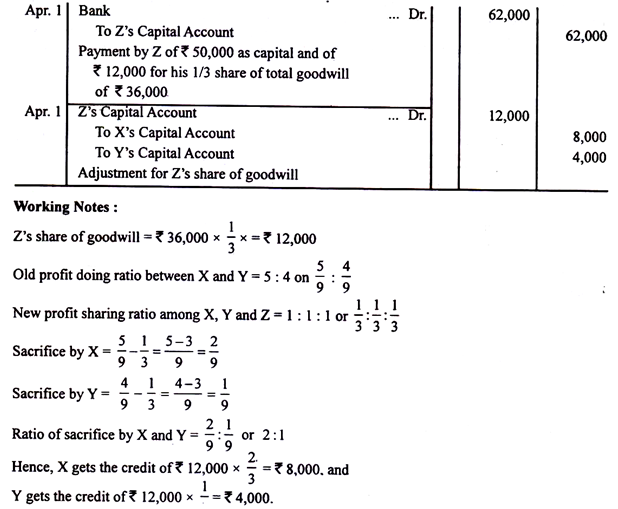 Revaluation of Assets and Liabilities:
When
a new partner is admitted, it is natural that he should not benefit
from any appreciation in the value of assets which has occurred (nor
should he suffer because of any fall which has occurred up to the date
of admission) in the value of assets. Similarly, for liabilities.
Therefore,
assets and liabilities are revalued and the old partners are debited or
credited with the net loss or profit, as the case may be, in the ratio
in which they have been sharing profits and losses hitherto. Partners
may agree that the change in the value of assets and liabilities is to
be adopted and figures changed accordingly or that the assets and
liabilities should continue to appear in the books of the firm at the
old figures.
(a)
If the values of assets increase, the particular assets should be
debited and the Revaluation Account credited with the increases only.
(b)
If the values of assets fall, the Revaluation Account should be debited
and the particular assets credited with the fall in values.
Note:
If
the value of debtors, investments or stock falls, the entry should be
to debit the Revaluation Account and credit a suitable provision
account. Thus, suppose it is desired to record a fall in value of
investments to the extent of Rs 9,500.
The entry is:

If
there is already a provision against a particular asset and the value
of that asset increases, the entry should be to debit the Provision and
credit Revaluation Account rather than to follow (a) above.
(c) Increase in the amounts of liabilities is a loss.
Hence, the entry is:

If an increase is not definite but is expected, the credit should be to a suitable provision account.
(d)
Any reduction in the amounts of liabilities is a profit and hence the
liabilities accounts should be debited and Revaluation Account credited
with the difference between the old and present figures.
(e)
The Revaluation Account should then be closed by transfer to old
partners’ capital (or current) accounts in the old profit-sharing ratio.
If debits exceed the credits, it is a loss and the entry is to debit
partners’ capital (or current) accounts and credit Revaluation Account.
Reverse entry is made when the credits exceed debits.
Example 6
Illustration:
A and B share profits in the proportions of three-fourths and one-fourth respectively.
Their balance sheet on March 31, 2012 was as follows:

On April 1, 2012 C was admitted into partnership on the following terms:
Pass
journal entries for the above-mentioned transactions excluding cash
transactions; prepare cash book and important ledger accounts. Also
prepare the balance sheet of the firm immediately after Cs admission.
Assume the profit-sharing ratio as between A and B has not changed. 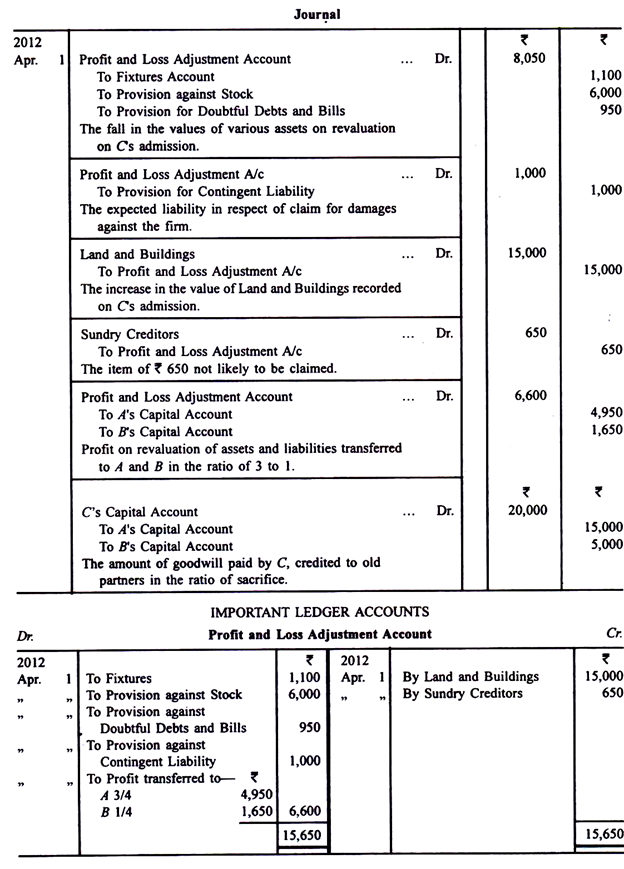 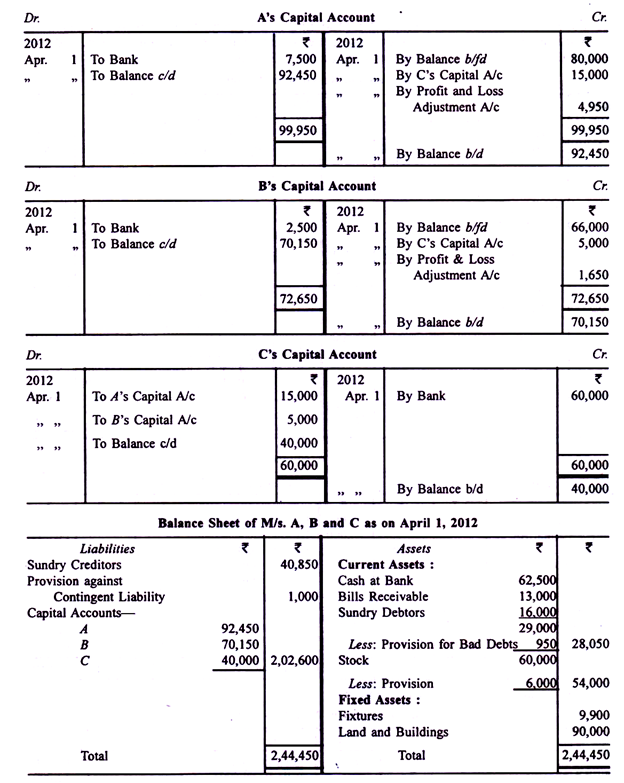 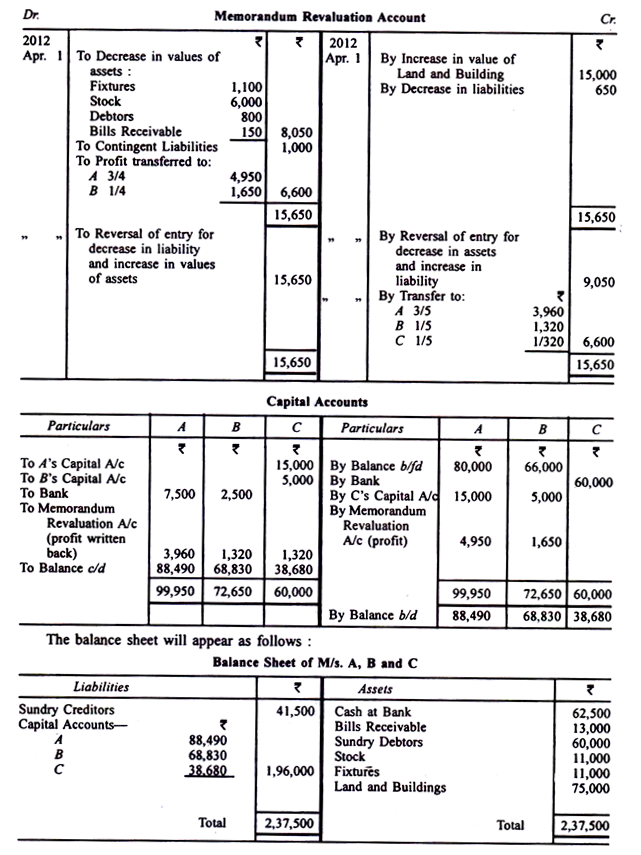 Journal entries regarding revaluation in the case discussed above will be:

New Profit-Sharing Ratio:
Finding
out the new profit-sharing ratio might involve a little calculation.
The language of the agreement is the most important factor. In some
cases, the new ratio is given. In others, only the share to be given to
the new partner is given; the assumption is that as amongst the old
partners, the ratio does not change. In such a case, one should deduct
from 1 the share of the new partner and then divide the remainder among
the old partners in the old ratio. Suppose, A and B are partners sharing
profits and losses in the ratio of 5: 3 respectively. They admit C and
agree to give him 3/10 of the profits.
Then, the new ratio will be calculated as follows:

In
certain cases, the incoming partner “purchases” his share from the
other partners in different proportions. Suppose, A and B sharing
profits in the ratio of 5: 3 respectively admit C giving him a 3/10
share of profits of the firm. If C acquires 4/20 share from A and 2/20
share from B, the new ratio will be

Treatment
is similar if the basis is the existing partners’ capitals and the new
partner is required to bring in proportionate capital. Suppose, after
making all adjustments as regards goodwill and revaluation of assets,
etc., the capitals of A and B are ?20,000 and Rs 16,000. The profits and
losses are shared by A and B in the ratio of 5: 3 respectively. C is
admitted and is to be given 1/4th share of profits. He has to bring in
capital representing his share. C gets 1/4, 3/4 is left for A and B.
Therefore,
the combined capital of A and B, viz., Rs 36,000 represents 3/4 share.
Total capital should be 36,000 x4/3 or Rs 48,000. C should bring Rs
12,000, i.e., 48,000 x 1/4. In other words, C’s share is 1/3 of the
combined shares of A and B (1/4:3/4); his capital should be 1/3 of the
combined capitals of A and B.
If
the actual capital of a partner is more than his proportionate share,
the difference should be credited to his current account. If the actual
is less, he should being in the requisite amount of cash or else his
current account should be debited. If the Partnership Deed requires
capitals to be proportionate to the profit-sharing ratio, the capitals
should be treated as fixed.
Example 8
Illustration 1:
The
following was the Balance Sheet of A, B and C sharing profits and
losses in the proportion of 6/14, 5/14 and 3/14 respectively:

They agreed to take D into partnership and give 1/8th share of profits on the following terms:
Give the necessary journal entries, and the balance sheet of the firm as newly constituted. 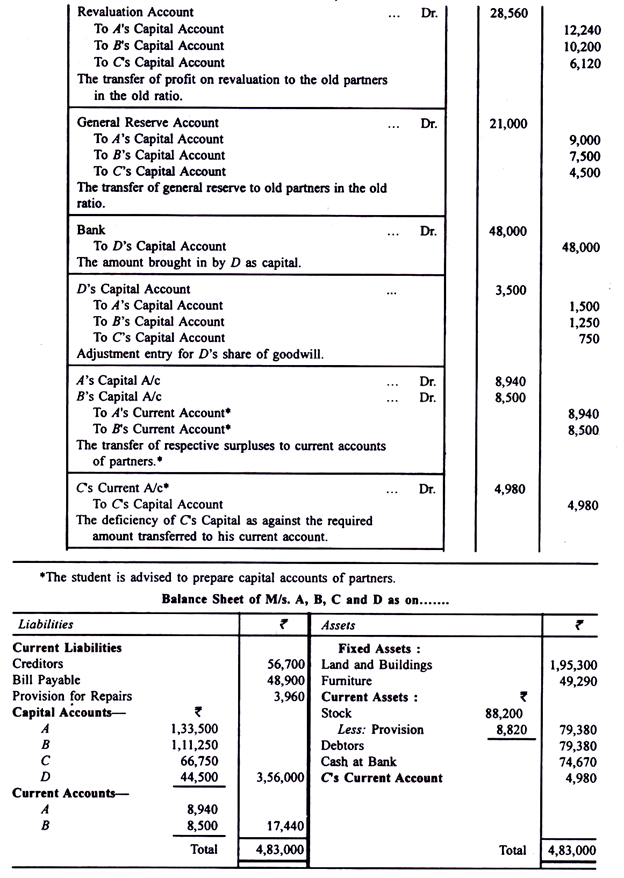 Example 9
Illustration 2:
The
balance sheet of a partnership firm of X and Y, who were sharing
profits in the ratio of 5: 3 respectively, as on 31st March, 2012 was as
follows:

On the above date, Z was admitted on the following terms: 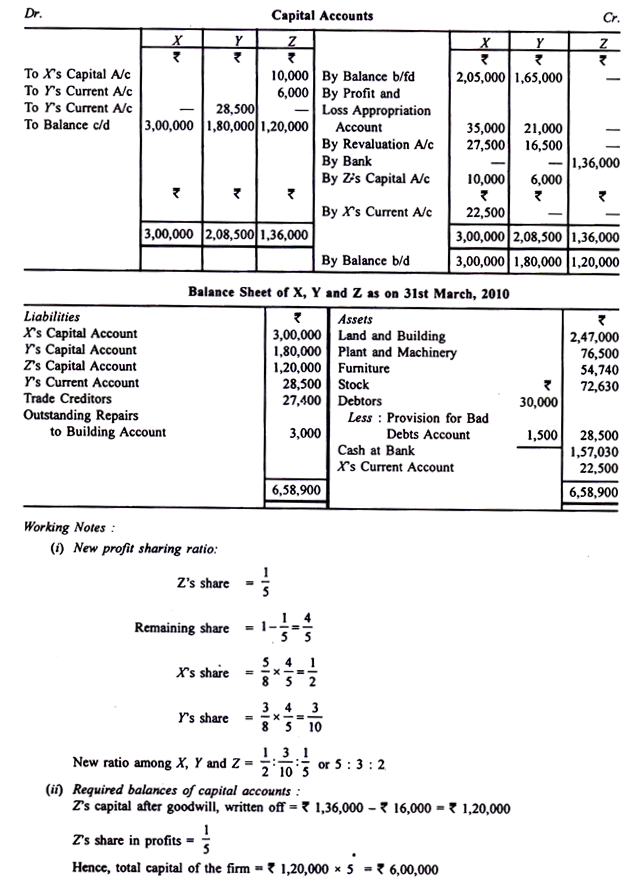