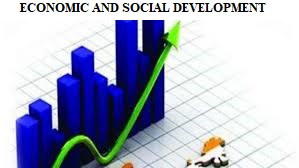 Refers to the positive change in human life and the increase of quality, quantity and values of goods and services produced in a given society
Or
Refer to the improvement of quality of life of all people in a given nation or society

There are two types of development known as:

This is shown by the improvement of social welfare of the people in a given community such as improvement of education, science and technology, health service, transport and communication service and other social services provided in the society.

Development can be described at two levels such as

This is shown by the increase of skills capacity great freedom, creativity self discipline and material well being.

The common indicators of national development include:

INDICATOR OF ECONOMIC AND SOCIAL DEVELOPMENT

The formula of calculating the per capita income is

E .g 1980’s the life expectancy of Tanzanians was above 60years while in UK it was above 90years.

The amount of food supplied is measured in colonies used by a person per year and the number of meals which a person used to get daily.

In developing countries the mortality rate is higher because of poor housing services and presence of diseases.

E .g. Tanzania’s literacy rate is low because many children do not go to school the number of schools are not enough and many people cannot offered the expenses of education as a result the number of illiterate people is increasing.

The amount of energy used in a country such as electricity fuel, coal and other sources of power depend on the level of development reached by the country. The consumption of energy in developed countries is higher compared to developing countries which is due to the development of the industrial sector science and technology and improvement of living standard

Other indicators of economic and social development include

THE FACTORS FOR ECONOMIC AND SOCIAL DEVELOPMENT

This is the basic fundermental factor for economic development in the society it is the basic factor because nearly all social and economic activities are taking place on the land surface, i.e. agriculture, pastoralist, mining, lumbering, transport and communication plus settlements.

Therefore without land or resources, the economic and social development cannot take place

This is the ability and skills which people need to have in order to be used in the production of goods and services, there are three basic sources of labour force such as

Human is the basic source of labour which is also used to drive other sources.

This is the money or anything worth which can be invested in business, capital is very important factor for a business to start/ take place because it is used to buy equipment pay workers, and to meet other expenses of the business. There are different types of capital such as material capital, money capital and human resources capital therefore if capital is reliable it facilitates the establishment and development of different projects.

These are materials in natural form or material is unprocessed condition, examples crops, minerals animal product timber, logs and poles. Raw materials are needed in order to enable production of goods and services to take place.

These are people who are ready to start production venture or an enterprise by using their money and skills in production of goods and services.

They are risk takers because the production venture cannot guarantee them to have profit, therefore more enterprises in the country means more employment opportunities and reliable source of income.

These are working instruments which enable the labour force and production process to take place effectively. There are several types of working instruments such as agriculture, tools, mining tools, transport facilities fishing tools and industrial equipments. The use of modern and better working tools increases the efficiency and productivity of goods and services and improving the quality of goods and services.

These are the means of transport, communication, storage, facilities and institution which facilitates the movement of goods and services money and people from one place to another availability of good infrastructure such as roads railways air ways water ways banks and ware housing improve the economic and social development in a country.

There are two types of financial institutions which are known as

Banks are the financial institutions which perform the following functions:

There are 5types of banks which operate in Tanzania such as

THE BANK OF TANZANIA

Functions of the central bank of Tanzania are as follows;

The implementation of financial policies in the country.

Is the amount of money which a country earns through export trade. Usually the balance of payments of a country in terms of foreign currency and kept in special accounts called EPA.

Is a bank account which is usually provides the followings

The contribution of commercial banks to the economic development include

These are financial institutions which do not provide banking services but they are responsible to mobilize saving life insurance, insurance against risks, old age insurance and offering specific credits.

The general votes of the non banks financial institutions include

The following are the functions of the insurance companies

There are many social security organizations which belong to the government of private owners e.g. the national social security fund NSSF the parastal pension fund [PPF] local prudent fund [LPF]

functions of the social security organizations are as follows

There are many co-operative societies in Tanzania which belong to the private entrepreneurs or government institutions.

THE ROLES OF THE GOVERNMENT IN DEVELOPMENT

Government can be defined as institution formed by the people in a certain country in order to provide leader ship services, to promote economic and social development and to protect the interests of the people.

Therefore in any country the government performs the following roles:

THE ROLE OF PRIVATE SECTOR IN ECONOMIC DEVELOPMENT

There are two major components of private sectors

Formal sector is that section of the private sector that follows the strict rules and regulations laid down by the government in undertaking their activities. For example people who run private schools, health centers, hotels and hostels. In Tanzania formal private sector is dominated by the following activities.

(i).   It produces goods and services that are enjoyed by the public for example transportation, hospital service etc.

(ii).  It produces employment to many Tanzanians hence increasing the knowledge.

(iv).  It facilitates the marketing process to our produced good

Informal sector is that section of the private sector that is somehow free from strict rules laid down by the government for undertaking their activities. For example Petty businessmen/ women, food vendors, local technician such as carpenters, mason, tailors.

IMPORTANCE OF THE IN-FORMAL PRIVATE SECTOR IN ECONOMIC DEVELOPMENT.

(i).   It provides employment to most Tanzanians especially to non-government employees like masonry, carpentry, and cookery.

(iv). Member of this sector are good and buyers of goods.

–        Sometimes the environment where members of this informal private sector for example Food vendors, street carwash, and repair is done anywhere in towns like Dar es Salaam.

–        Tools and equipment to enable them to improve their economic activities

As already explained under the types of development. Social development simply means; Improvement in the welfare of the people that include provision of social services like education, health, transportation, water, and power supply.

ROLE OF THE GOVERNMENT IN THE PROVISION OF SOCIAL SERVICES

(a).        To train the required person who could assist in the provision of social services. For instance training of teachers, lawyers, doctors and nurses, and civil, water, electrical and mechanical engineers.

(b).        To provide the equipment and tools to the respective social service. For example provision of teaching and learning instructional materials in schools and colleges and medical facilities in hospitals

(d).        To effect environmental conservation programs, so as to protect various sources of water from being destructed.

(e).        To educate the public on how to make the best use of these social services.

:The effectiveness of the government in its provision of social services.

Despite many problems and challenges that Tanzania is facing in the provisional of social services the government has managed to do the following,

The government provides medical facilities and personnel to its health institutions; health centers and hospitals. It finances researches in different related problems such as TB, Malaria, HIV /AIDS so as to find the right solution to it.

By using environmental expert the government explores new sources of water and protects the existing ones from destruction like Udzungwa and Kilimanjaro beautifully sources.

The government of Tanzania has expanded and repaired transport and communication system, in the county. It has for instance repaired the Chalinze Morogoro and the Chalinze Tanga.

In partnership with the private international companies Tanzania has a good linkage in communication network. For example it has shifted from the traditional analogy into digital technology where a great number of telephone companies like Vodacom, Airtel, Tigo, Sasatel, and Zantel operate in a competitive mode.

Above of all there have companies such as AZAM TV, STAR TIMES, and DSTV which use decoders in showing different TV programmes.

ROLE OF THE PRIVATE SECTOR IN THE PROVISION OF SOCIAL SERVICES

Like the government, the private sector also provides social services to the public in the following areas,

Education; It involves in constructing and operating schools and colleges at different levels from kindergarten to the university.

Health services; It engages in building and running dispensaries, heath centers, and hospitals allow the country in both rural and urban areas.

Transport and Communication; Most of these services are provided by the private individuals or companies. Most of bus services, trucks for carrying cargoes, marine and air transport in Tanzania are dominated by private sector.

Water supply; Private individuals and companies engage in drilling wells and trapping water from local water sources, and supply to the public where the government has failed to supply water.

THE EFFECTIVENESS OF PRIVATE SECTOR IN THE PROVISION OF SOCIAL SERVICE

(a).     Individually owned companies like the IPP have provided social services in many areas to the needy people, in education and medical services in Tanzania

(b).     Religious organizations have managed to build schools and dispensaries, to render services to the people in both rural and urban areas.

(c).     Community based organizations support the construction of roads , supply of teaching – learning and health services in their localities.

(d).     NGOs and other related institutions also participate in the provision of social services for example the AMREF deals with the control of HIV/ AIDS

CHALLENGES FACING THE PROVISION OF SOCIAL SERVICES IN TANZANIA