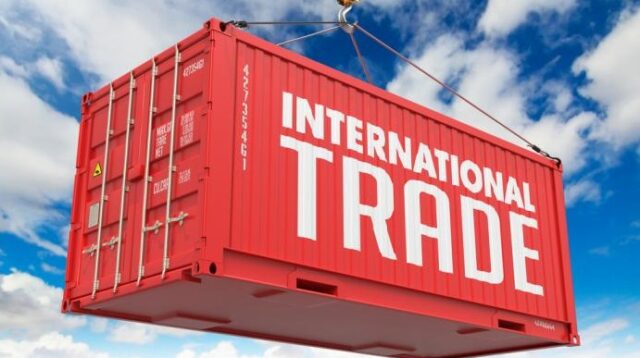 – Is the trade taking place between two or more countries.

Qn:- What is the difference between International and domestic trade?

The following are the differences:-

Different countries are endowed with different natural resources not found in other countries.
There is a different in human skills among the countries, talents and creativity leads to production of different commodity which has to be exchanged.
There is an even distribution of capital and technology. Countries with high capital and high level of technology will produce and export.
The benefits from trade in terms of revenue, profits and International relation.

It increases competition and quality of goods.
In enables countries to dispose surplus
It brings foreign exchange.
In increase International relations
It leads to specialization in production
It leads to mobility of factors of production especially labor and capital.
It leads to expansion of market
It helps to improve the balance of payment
It increases consumer sovereignty

Qn.:- 1. International trade is must, Discuss

Discuss the problem faced by developing countries in international trade.

Barriers are limitation or difficulties which limit smooth flow of commodities in International trade. They can either be natural or artificial (man mode).

Tariffs (custom duty); It’s a tax which government imposes on goods entering the country. It is aimed at controlling imports by making them expensive. It can either be specific or adventurer.

To correct the balance of payment disequilibrium i.e. tariffs are used to correct BOP deficit by making import expensive.
To protect infant industries which cannot withstand competition?
To promote employment of resources.
To reduce dumping of inferior goods.
To protect declining of industries
To promote key/major industries particularly Agriculture and Tourism
To diversify the economy

Qn: Discuss the argument against protectionism:-

The following are the argument against protectionism:-

It reduce customer sovereignty
It discourages competition
It leads to low quality of goods.
Import tariffs (custom duty) can lead to inflation as result of high price in import.
It lowers the volume of trades
It may lead to unemployment resulting from lack of market.
It is against the theory of comparative advantage and absolute advantage.

There are two theories of trade namely:-

This theory was advocated by Adam Smith. It states “A country is said to have absolute advantage in the production of a commodity if it can produce that commodity more efficiently than the other country”.

The theory is based on following assumptions:-

One unit of labor in Tanzania can 10 kg of tea and only 2kg of coffee. Both countries can gain in trade if each would specialize in the production in which it has absolute advantage.

It can be illustrated as follows:-

Output after trade and specialization

Specialization would lead to:-

Qn. Given the following information:-

Is a condition in which a country produces some goods or services at a lower cost in terms of opportunity cost of other good and have services which could have been produced.

It is based on comparison of production cost and it is expressed in the form of comparative ratio which gives the opportunity cost.

According to comparative advantage the two countries can trade and gain from trade as follows:-

Given the following production per unit labor:-

The figure represents Input quantities per unit of output of the corresponding commodities.

Assumption of theory of comparative advantage:-

It assumes that it has no transport cost
Labor are homogenous
There is free trade
There is perfect competition
There only two countries or nations.
Factors of production are perfectly mobile.

Criticisms against the theory of cooperative advantage:-

The assumption of two countries and two commodities is unrealistic.
Labour is not homogenous
Transport cost must be involved
There are other factors of production which are important compared to labour.

In encourages specialization
It leads to balance of payment between the trading countries.
It encourages free trade
It provides a basis for trade (international trade).
It enables proper utilization of resources.

Is the rate at which a country goods (export) are exchanged against those of other country(import)
It is the ratio between price index of export and price index of import.

PX is price index of export

PM is price index of import

In 1990 terms of trade in Tanzania worsen, in had to export of large physical quantity of goods to buy the same amount of import goods.

Qn. 2: Given the following prices of import and export, Calculate the terms of trade:-

It is the ration between the product price index for export and quantity of export to the price index of imports.

Where, Ox is quantity of export = Vx/PX

Where; Qx is quantity of export

QM is quantity of import

It occurs when a country export prices rises while the import prices decline or remain constant. This implies that a country can get more import by exporting the same quantity of export.

Countries terms of trade are said to be unfavorable when the price of export declines or remain constant while the price of import rises. This implies that there is less foreign exchange comings from export.

Determinants of term of trade:-

These are the factors which determine whether terms of trade are favorable, unfavorable or balance.

Forces of demand and supply

When the demand of export raises the price of export increases leading to favorable T.O.T and Vice versa

The degree of monopolization

When there is a monopoly, high degree of monopoly power terms of trade are favorable.

This means quantitative restriction. It leads to unfavorable terms of trade to the exporting countries.

This is lowering of country currency which lead export to be cheaper and import expensive hence unfavorable.

Increase in import duty leads to increases in import prices, leading to unfavorable terms of trade

Qns: Discuss why terms of trade in lack are mostly unfavorable:-

In LDC’s most countries are ago based countries and due to limitation of land and increase in population affect etc.

In LDC’s have low technical progress.

Qn. Discuss the possible solution for deteriorating terms of trade in LDC’s:-

The following are some of the solution:-

Export promotion increases the demand of export leading to increase in price.

Increase in population leads to increase in demand and vice versa.

Is the difference between the value of the countries visible export and visible imports:-

Balance of trade can either be favorable or unfavorable:-

Is an accounting statement that shows the difference between in flow (receipts) and outflow (payment) of foreign currency within a specific time.

Balance of payment is divided into the following account:-

This is an account that has the following accounts:-

Goods and services account.
Unilateral accounts which deals with grants and loans

The net balance can either show surplus or deficit. Deficit means there is more out payment than in payment.

This accounts record international monetary flows such as investment in business, real estates and in stock exchange.

Disequilibrium in balance of payment:-

The following are its major causes:-

Increase in demand for imports

The more you import the more money you pay:-

Is the price of a countries currency expressed in terms of another country currency.

This is an exchange rate that is determined by market forces. i.e. demand and supply.

The forces of demand and supply make exchange rate flows upward and downward.

There is no government intervention
It helps in managing the deficit in balance of payment.
It helps indicate the strength of the currency.
It makes the price of domestic currency against foreign free and fair.
It reduces competitive exchange rate depreciation among countries.

It causes uncertainty to businessmen
In some cases there is government intervention leading to no free exchange rate.
It leads to inflation, particularly imported inflation.
Leads to misallocation of resources
It has speculative effect to businessmen
Fixed exchange rate:-

– Its an exchange rate which government set and maintain rate of exchange through central bank.

Is a system where the price of particular / domestic currency is stick/ fixed in relation to a given foreign currency, for example TSH and dollar where all the prices of goods and services in Tanzania are determined by dollar.