Denudation has been going on the continents where tons and tons of materials are removed from mountains and hills and get deposited in ocean; but the hill of mountains are not reduced to the sea level.

WHY THIS IS SO?

The phenomena can be explained by the theory of Isostasy.

The theory suggest that the continents and their major features are maintained in a sort of equilibrium or are moving towards that equilibrium.

Isostatic equilibrium can be disturbed

How? Processes on the surface of the continents.

-Weathering/mass wasting, transportation, and erosion.e.g    removal of material which lower the surface. 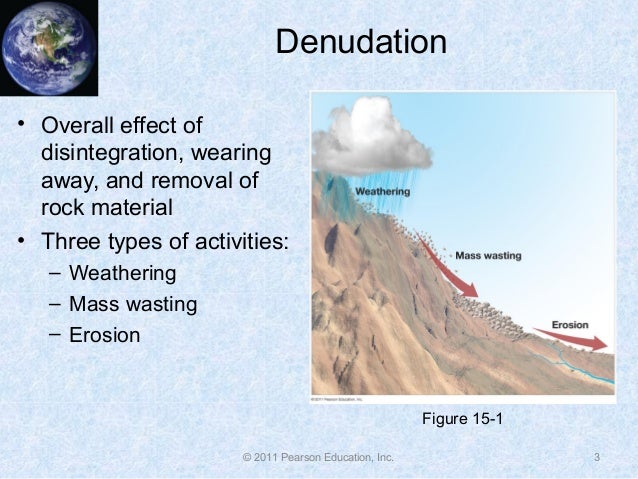 2) Deposition -Building up process (rising of the land)

When denudation removes the material from mountains there is pressure released, uplift occurs where the material is removed and there is no Isostatic balance.

In such process a state of equilibrium is restored.

EFFECT OF DISTURBANCE AT SURFACE AND READJUSTMENT OF ISOSTATIC EQUILIBRIUM

EFFECTS OF DISTURBANCE OF ISOSTATIC EQUILIBRIUM

1.      The depression of the crust in the northern part of America and Europe was due to the weight of ice sheets of vast thickness during the ice age.

2.      After the melting these ice sheets, the crust has been rising. Slowly for example, there are numerous former beaches that occur around the coast of Scandinavia. They now lie between 8m-30m above the present day beaches. These old beaches have been raised because of the uplift of the land.

3.      The continental shelf around Antarctica is covered with water to a depth of about 750m compared with 180m around other continents.

4.      The presence of Rias and Estuaries between the coast lands of Gambia and Sierra Leone.

5.      The submergence of forests on the shores of Britain.

IMPORTANCE OF THE THEORY

1)      It provides the knowledge on the dynamic state of the earth’s crust that is the earth’s crust is not static but it is always dynamic as it tends to balance itself after some disturbances with the influence of the gravitational force.

2)      The analogy that the crust floats on the mantle, just like the iceberg floats on and the ocean or sea water, is so crucial in the understanding of the theories of plate tectonics and continental drift.

3)      The theory also helps in deciphering (understanding) how different landforms were formed.

4)      It also gives the basic for predicting the future of the crustal state at any particular place on the earth’s surface.

5)      It can also help human being in taking some precautions depending on the nature of the phenomena that might have been observed in the course of time, like the occurrence of ice sheets and melting of ice.