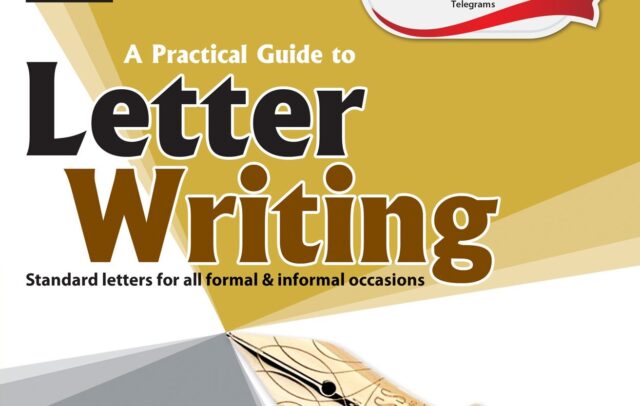 What is a letter?

A letter is a piece of hand writing or printed text addressed to a recipient and sent by mail.

A letter is a writing or printed message normally sent by post in an envelope.

These are letters written when seeking an employment. They are very important as they help the applicants to secure the employment. And since they concern your career, they should be given sufficient attention and thought.

Application letters are generally one page at most in length and have a standard format.

THE OPENING STATEMENTS IN APPLICATION LETTERS

OTHER USEFUL EXPRESSIONS IN FORMAL LETTERS

–  I enclose with this letter copies of my certificates.

E.g. We are wondering whether you have perhaps concentrated too much on the academic aspects of the matter.

E.g. We trust that the payment will be made before the end of this month.

E.g.  RE: FAILURE TO SIT FOR ENGLISH TEST.

I am writing to form you that I was not able to sit for the last week announced English test. I was very sick suffering from Malaria and I had to attend the medical check – up.

An application letter regardless of their purpose, consist of the following parts or elements:

I have come to know through a reliable source that you urgently the services of some translators and interpreters.

I am 30 years of age with Bachelor’s degree from the University of Dar es salaam and presently employed with Top Travel ₰ Tours as an interpreter and translator. My main job here is to work as a guide – interpreter with foreign tourists and visitors especially from Asia, Europe and America.

I can read, write and speak fluently Chinese, English, French and Japanese. I have obtained a degree in translation and Interpretation of these languages from the University of Dar es salaam. I have also translated the book of “Houseboy” from French into English and Japanese languages and this has been acclaimed as a creative work of translation.

Although my present employers are fully satisfied with my work and conduct, but I realize that here is no opportunity for creative translation and further promotion. As I am keenly interested to upgrade my career, especially in creative translation, I have decided for a change.

I would be glad to provide you a couple of excellent references at the time of interview. I look forward for an early interview so that the matter may be discussed in detail and I may put before you other relevant data in regard to my long experience and expertise in the line.

Write a letter to the General Manager of Mbeya Cement Company Ltd., P.O.Box 400, Mbeya on a vacancy for secretary. Say you are ready to work as a secretary. Your address is 14, Songwe – Mbeya.

Please kindly refer to the caption above,

I am humbly writing to apply for the above mentioned post which was advertised on the Sunday Nation of 28th September, 2017, I am very much interested in it and I believe that I have the necessary qualities to excel in the job.

I am an active Tanzanian young man aged 25 years old. I finished my Form Four education at Vuchama Islamic Seminary in the year 2010 where I passed with division three in my National examinations. Then after, I joined Barongo Junior College where I took short secretarial courses and worked at Bi Kirembwe Institute as a Secretary for one year.

After having worked for one year, I later joined the University of Dodoma for further studies pursuing Diploma in Secretarial Management and graduated last year with G.P.A of 3. 5.

My core identifying features are self motivated, cooperative, punctual and confident in nature. I am good at computer literacy especially programs like Ms words, Excel, Power point with a very good typing speed.

Your wonderful performance as a leading Cement Company in the country is what has impressed me to apply for this post plus the fact that I am always interested in working under challenging environment.

If I am given this chance, I hope to take the company at a more advanced stage of success that it had never experienced before. I hope my application will meet your positive consideration and I am eagerly looking forward to hearing from you soon. Enclosed with this letter are the copies of my academic certificates. Don’t hesitate to contact me at any time for more information.

A monthly test results of Form Three showed there was a miserable failure among the students particularly English subject. This fact makes the Subject teacher furious. Write him a letter of apology and commitment that you will perform wonders in the coming exams. Your teacher’s address is Ahlulbayt Islamic Seminary, Department of English, P.O.Box 137 Kigoma Sign your name as Asinjo/Wanjiro.

RE: REGRETFUL ACKNOWLEDGEMENT OF FAILURE IN EXAMS.

I am extremely sorry that I could not keep my promise which I previously made to you the very first day I joined this class. We had so many wonderful plans together which could bring the sweet fruits of academic excellence. It is from this meeting when I gave you a promise of performing wonders in my form three exams.

Sir, I really don’t know how to express my regrets and remorse for my poor performance in my monthly test in general and English subject in particular. Actually the results shocked me a lot and I couldn’t bring myself to believe what happened to me. The simple word I can say is “I can hardly believe it” I really wonders how it happened. I remember I had been an exceptional student and have scored uniformly so well in form two class.

As for now, the reason why I have such a poor and disgusting performance in my monthly test may be the fact that I had been too busy for nothing. I had very poor preparation before the exams, I did not have my individual time table, no group discussion and I used to spend most of my time chatting with my friends over internet. When my father saw my results, he was as fierce as a mad dog. He reproached me for two hours and he nearly split my head in two.

Sir, I have now come back to my sense, I have realized my mistake and made up my mind now. To prove my words, I have decided to join the school camp and I have already formed the group discussions with my classmates. For now on, my aim is to study very hard so as to get distinction in all my future exams. This is because I now have come to believe the English saying which reads “Make hay, while the sun shines”

In as few words as it takes, I again want to underline the fact that the above unexpected turn of events which prevented me from keeping my promise with you, never will they have any room to me.

I wish there were better word than sorry to express my deep feelings of regret for my betrayal and disappointment. I hope you will understand and forgive me since you are as forgiving as Uncle Araali in the Passed like a shadow, the very interesting novel you taught us in the class.

Your obedient and lovely student,

The heading above is much concerned.

I am a boy Tanzanian citizen aged 22 years old with a Certificate in Business Administration and excellent skills in Accounts.

I am with honor to apply for the post of Account clerk in your esteemed institution as was advertised in The Citizen of 26th February, 2015.

I have enclosed my CV, copies of certificates, and contacts of my referees for your ready reference.

I hope my application will be positively considered.

Write a letter to the Managing director, The Big T company L.T.D, P.O.Box 090 Mwanza. Apply for the post of an accountant as it was advertised in the Sunday News of 21st April, 2014. Sign your name as Mchapakazi bora (Your address is P.O.Box 372 – Mji Mpya, Dodoma).

In response to your advertisement for an accountant in the Sunday News of 21st April, 2014, I wish to apply as a candidate for this post.

I am a young and energetic person of 20 years of age with credits in Book-keeping, Commerce and Mathematics in my ‘O’ Level examination. I have already some experience as an assistant accountant as I worked with Barongo Enterprises Company Ltd., Dar es Salaam for a period of over a year on part time basis. However, I had to leave the job on account of some family circumstances. I have also done typing course and possess a certificate with grade A in typing and possess a typing speed of 50 words per minute. My former employers would be glad to give a reference for me.

If offered this job, I would do my best to win your confidence through hard and sincere work.

I look forward to hearing soon from you.

LETTER TO THE EDITOR _ LETTER WRITING