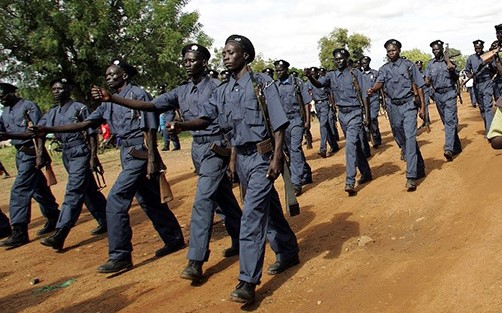 National military comprises of the army, police, prisons, national service, immigration department and the militia. National legal institutions are formed by the judicial organ of the government.

After independence, African governments established their own national military and legal institutions as to achieve effective defense, security and justice for the people. For instance Tanzania established her own military force called Tanzania People’s Defense Forces on 1st September 1964.

THE OBJECTIVES OF ESTABLISHING NATIONAL MILITARY AND NATIONAL LEGAL INSTITUTIONS

To provide assistance during national emergencies

To participate in nation building activities

Promotion of internal security and integrity

To protect the country from external aggression

To detect and fighting off criminals

To ensure peace in the country

THE FUNCTIONS, STRENGTHS AND WEAKNESSES OF NATIONAL MILITARY FORCES AND NATIONAL LEGAL INSTITUTIONS

National military comprises of the army, police, prisons, national service and the militia. After independence, African governments established their own armed forces and police for the purpose of ensuring security. Tanzania established her own military force called Tanzania People’s Defense Forces on 1st September 1964.

It comprised of four branches namely

FUNCTIONS OF THE NATIONAL ARMED FORCES

To preserve internal security. For example Kenya in 1978 during the attempt coup d’état when Kenya Army fought off some elements of the rebel Kenya Air Force who wanted to take over the government using unlawful means.

To participate in nation-building activities for example road and bridge construction.

To provide assistance to the public during national emergencies. For example during floods, famine, fire outbreaks and other national disasters.

To detect and fight off criminals who use water masses like the Atlantic and Indian Ocean to commit crimes. For example the Somali pirates, narcotic runners and gunrunners as well as illegal trawlers who steal fish and other marine resources from African states.

To participate in peace keeping missions in different parts of the world by participating in United National, African Union and Commonwealth peacekeeping duties.

WEAKNESSES OF NATIONAL MILITARY FORCES IN AFRICA AFTER INDEPENDENCE

To abort coup attempts and overthrowing their governments

Corruption in the running of operations for example military officers from Zimbabwe was accused for having smuggled gold and other mineral resources during peacekeeping operations in the Democratic Republic of Congo.

Indiscipline for example some soldiers have been accused of looting and raping civilians.

Dependence from developed countries for example some African countries depend on European and USA countries in training and equipping their armies.

Low level of education the majority of the military personnel were not well educated in Africa for a long time due to the fact that military career was not taken as a prestigious occupation.

STRENGTHS OF NATIONAL MILITARY FORCES IN AFRICA AFTER INDEPENDENCE

A lot of military personnel in recent years have been enrolled in institutions for higher education and have improved their image while relating with members of the public.

Safeguarding the national security of the country from external aggression.

Participating in peace keeping missions within and outside the country.

Assisting the public during national emergencies.

Detecting and fighting off criminals

The national legal institutions include judiciary however; there is close coordination of different departments in the government in making sure that the law and order are preserved without denying anyone his or her rights in society.

This can be witnessed through their different functions in the country. For example when the police force and the armed forces ensure preservation of national security and integrity the judiciary ensures the administration of justice through the court of law.

OBJECTIVES OF THE NATIONAL LEGAL INSTITUTIONS

To settle disputes among different parties

To guarantee rule of law for all citizens

Assisting in the law development

Administering justice in the country

FUNCTIONS OF THE NATIONAL LEGAL INSTITUTIONS

They administer justice through law interpretation

They spell out the penalties to be meted out to offenders and the amount to be compensated to the offended part.

They ensure citizen’s protection under the law and to sentence accordingly those who violate the rights and freedoms of others.

They safeguard national sovereignty through swearing in of senior members of government.

STRENGTHS OF THE NATIONAL LEGAL INSTITUTIONS

They are based on equality and fairness of all the parties

They guarantee the justice for all the parties

The legal system is flexible and embraces some of the traditional methods of conflict resolution. For example Islamic courts are given rooms to handle cultural and religious matters in African legal systems with a large population of Muslims.

WEAKNESSES OF THE NATIONAL LEGAL INSTITUTIONS

Some of them are corrupt for example in Kenya many magistrates and judges lost their jobs in2003 following allegations of corruption.

Interference of some senior members of the executive in the work of legal institution thereby undermining administration of justice in the state.

Illiteracy and ignorance of the citizens hampered the efficiency in the administration justice by legal institutions.

Dependence on other government departments like armed force and police force as they cannot operate efficiently in the absence of support from these departments.

Lack of financial resources to hire enough officers to assist in the administration of judiciary.

Interference of cultural traditions in the operations of the legal institutions as some community applies cultural methods of administration of justice, some of which contradict the official legal institutions for example traditional forms of compensation or avenging crime among clans.

Other sections include Criminal Investigation Unit, Game Reserve Unit, Field Force Unit, Anti-Narcotics Police, Police Air Wing, Flying Squad and the General Service Unit. In Kenya there are some similar departments like those found in Tanzania however their police comprise a unit known as the administration police, whose work is to assist officers in the provincial administration.

To ensure maintenance of law and order

To protect the law and preserve both life and property

To investigate crime and prosecute offenders

To arrest and detain suspected offenders

To assist the public especially during emergencies

To regulate traffic and punish offenders

FUNCTIONS/RESPONSIBILITIES OF THE POLICE FORCE

Maintaining law and order by arresting and punishing the law breakers.

Detecting those about to commit the crime

Investigating the crime and prosecute the offenders

To confine suspected criminals in remand

Regulating tariffs and arrests the offenders by checking for defective vehicles on the roads in order to safeguard life.

Provision of assistance during national emergencies

They take part in national projects like constructional activities of national infrastructures and facilities.

Provision of entertainment in marking national days like Independence Day, Union Day in Tanzania while in Kenya Jamuhuri Day and other national holidays.

They investigate and arrest international criminals such as terrorists, drug traffickers and the notorious Somali pirates who harass water vessels playing the Indian Ocean.

Lack of efficient transport and communication equipment for discharging their duties efficiently.

They have been accused of being involved in corrupt practices for example demanding from the public and failing to do their duties according to the law.

Recruitment of people with law academic qualifications in the force

Interference with police work by politicians and senior servants

The influx of small armies in the continent as a result some of the criminal’s posses more sophisticated weapons than the national police.

Terrorist disturbances to the police force for example in 1998 both the American Embassies in Tanzania and Kenya was bombed by terrorists. Moreover, Uganda suffered a terrorists bombing attack in July 2010.