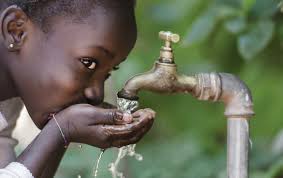 CHANGES IN THE PROVISION OF WATER SERVICES IN AFRICA AFTER INDEPENDENCE

In African countries provision of clean and safe piped water during colonialism was mainly available in urban centers particularly in the European neighborhoods, African residential areas lacked clean water supply especially in rural areas where people continued to trot for many kilometers in search of water for human activities and for their livestock.

Soon after independence most African countries inherited colonial system of water provision that was very inadequate, disorganized and imbalanced in nature this was due to absence of government policies focusing on national water provision.

As time went on most African countries recognized the importance of having clean, safe and reliable water supply because provision of water is the only way of sustaining a healthy population. Following this they started to put emphasis on water provision through establishment of different strategies, projects and programs that ensures the provision of water supply in the country.

OBJECTIVES OF PROVISION OF WATER SERVICES IN AFRICA AFTER INDEPENDENCE

Provision of equitable distribution of infrastructures in the country

Improvement of levels of sanitation in the country

WEAKNESSES IN PROVISION OF WATER SERVICES IN AFRICA AFTER INDEPENDENCE

Unequal distribution of clean water between urban and rural areas

Existence of natural hazards, like droughts even when there is plenty of water that could be tapped for irrigation many farmers suffered from drought. Drought has led to the shrinking of water resources like dams and rivers.

Lack of skilled personnel who could repair and install facilities to supply water to residents.

Lack of financial resources as results most government does not prioritize provision of good sanitation following this many people loose lives due to water transmitted epidemics including cholera typhoid and dysentery.

ACHIEVEMENTS IN THE PROVISION OF WATER SERVICES IN AFRICA AFTER INDEPENDENCE

Provision of education to the mass advising them to boil drinking water in order to avoid water transmitted diseases like typhoid.