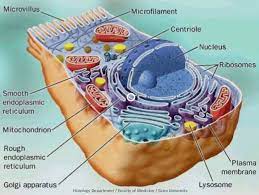 Proteins are polymers of amino acids joined together by peptide bond. 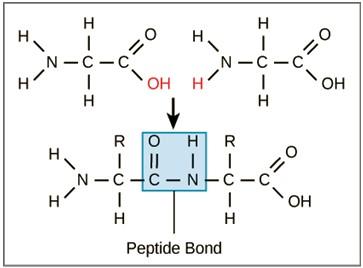 OTHER BONDS FOUND IN PROTEINS.

Ionic bonds: is an electrostatic attraction between positive and negative charge.

Van-de-Waal forces: these are weak non-attraction forces (hydrophobic interactions) created between –CH3 groups which are non-polar.

To whether they contain essential amino acids.

ACCORDING TO LEVEL OR ORGANISATION.

This is a linear sequence of amino acids joined together by peptide bonds. Also disulphide bond may be found. 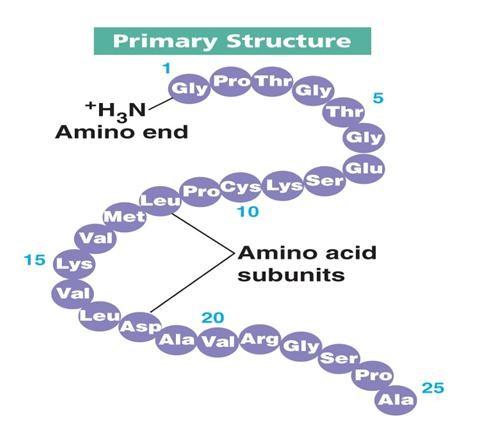 This is due to coiling or twisting of the polypeptide.

This is due to attraction of various amino acids.

This is a component of hair, claws, nails, as well as skin.

Collagen is a compound of tissues like bones and cartilage. Collagen is an example of β pleated sheets.

Tertiary structure is due to coiling and twisting of the polypeptide helix forming a globular or spherical shape.

Examples of tertiary structures. (They are very soluble). 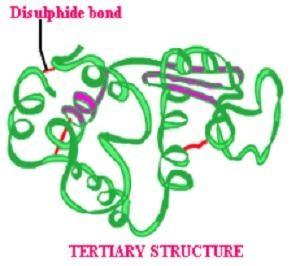 Quaternary structure is due to coiling and twisting of various polypeptide chains usually the structure is associated with non-protein parts called prosthetic groups e.g. hemoglobin. 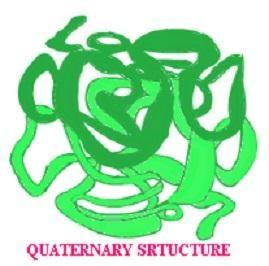 THE FOUR LEVELS OF PROTEIN STRUCTURE 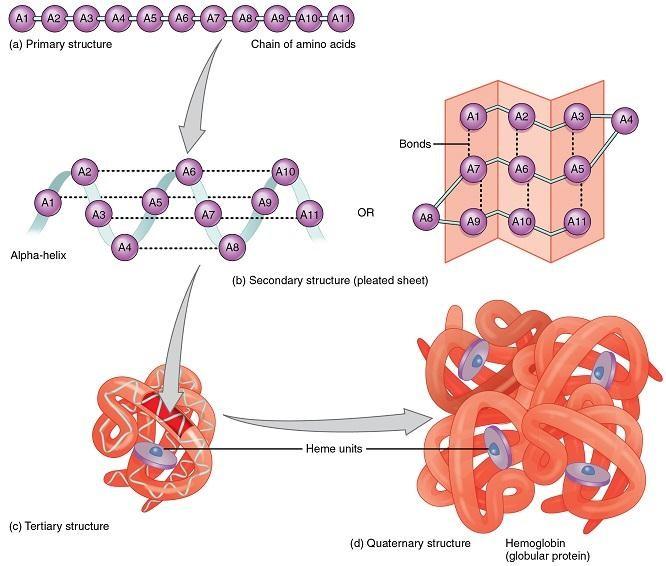 BASED ON WHETHER THEY CONTAIN ESSENTIAL OR NON ESSENTIAL AMINO ACIDS.

Essential amino acids are those which cannot be synthesized by human cells but are obtained from food.

All of the 20 α amino acids are needed to make different proteins in the body of a human.

Twelve of these amino acids can be synthesized by the cells from other substances that are present in the body; these are called non-essential amino acids.

The other eight cannot be synthesized by the body and must be included in the persons diet are called essential amino acids.

Simple proteins are made up of amino acids only.

Made up of amino acids; are globular proteins associated with non protein materials.

This is because their side chains have no charge at the pH of body cell.

Thus are divided into;-

Seven natural amino acids have side chains(R) that are non polar or hydrophobic.

These hydrophobic are either alkyl or aromatic in nature.

In general these amino acids are more soluble than hydrophobic amino acids.

The acid chain of glycine (gly) is just hydrogen.

The other seven neutral hydrophilic amino acids have side chains that can form either strong or weak hydrogen bond with water.

These have hydroxyl group in either side chain serine (ser) theorine (Thr) or tyrosine (try).

Acidic amino acids have side chains that contain a second carbonyl group.

At the pH of cells in the body, these carboxylic groups exist primarily as negative charged carboxylate ions and this interact strongly with water molecules.

Three of the amino acids contain a side chain that act as a proton acceptor or base.

They are thus classified as basic amino acids, these are lysine (lys), arginine (arg) and histamine.

Fibrous in nature but soluble in water e.g. fibrinogen.

Like proteins, nucleic acids are largely polymers made up of small number of different building blocks called nucleotides.

Each nucleotide is in turn composed of 3 smaller parts.

A phosphate group.
Monosaccharide
A nitrogen containing base.

The term nucleotide is used to refer to nitrogenous base bound to a monosaccharides.

There are two major types of nucleic acids. 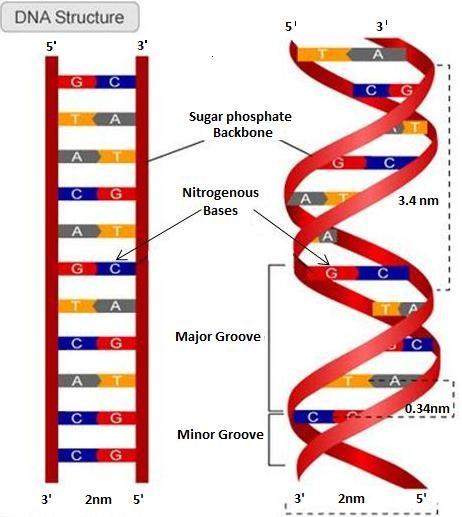 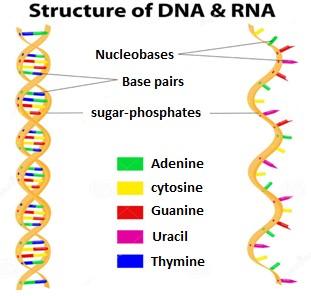 JOINING THE NUCLEOTIDES TO FORM A POLYMER OF DNA OR RNA.

Diagram of a long nucleic acid. 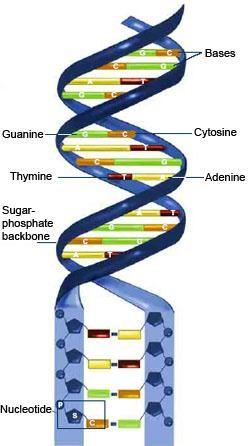 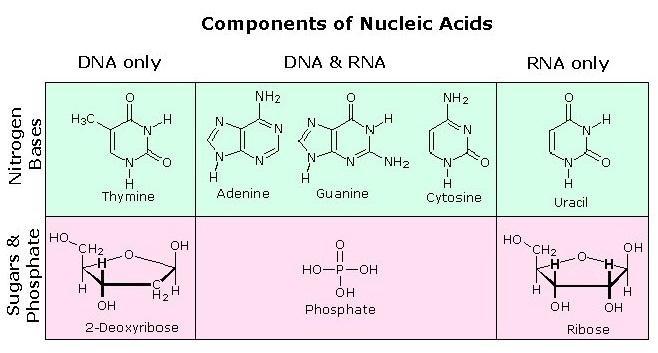 The DNA consists of two long polynucleotide strands and the base components of each nucleotide on one strong can form hydrogen bonds with only one specific nucleotide base on the other strand.

Guamine (G) can hydrogen bond only to cytosine in another DNA strands form a base pair.

Adenine (A) can hydrogen bond with thymine (T).

ATP is formed from the nucleotide adenosine monophosphate by the addition of two further phosphate molecules. 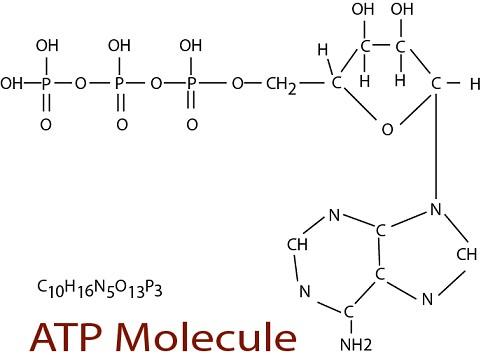 ATP is an energy store, because the last branches are highly energetic on breaking.

The hydrolysis of ATP to ADP is catalyzed by the enzyme ATPase and the removal of the terminal phosphate yield 30.6kj mol-1 of free energy.

So does the second one to from ADP and AMP respectively.

AMP and ADP may be re-converted to ATP by the addition of phosphate molecule in a process called phosphorylation of which there two main forms.

A metabolic active cell may require up to two million ATP molecules every second. ATP is the source of energy for;

It provides the energy needed to build up macromolecules from components units.

2. Movement- it provides the energy for many forms of cellular movements, including;

Secretion – it is secreted to form the vesicle in the secretions of the cell product.

Activation of chemicals – it makes chemicals more enabling them in reacting (more readily) e.g. the phosphorylation of glucose at the start of glycolysis.

Enzymes are simple or compound organic proteins which are organic catalysts catalyzing reactions in living tissues.

They are bio catalysts found in living things.

Catalysts accelerate chemical reactions although a catalyst is a participant in a reaction and undergoes physical change during the reaction.

It reverts to its original state when the reaction is complete.

Enzymes are protein catalysts for chemical reactions in biological systems.

Most chemical reactions of living cells would occur very slowly, were it not for catalyzing enzymes as illustrated below.

Energy diagram under catalyst action showing progress of the reaction. 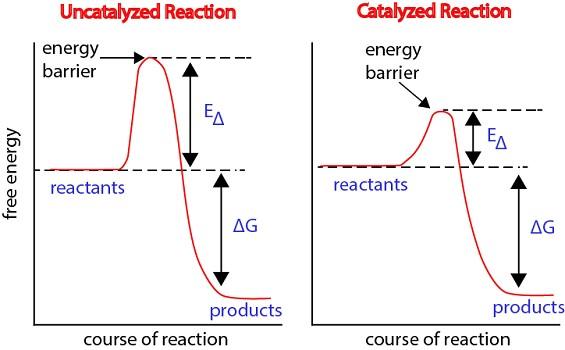 NB: as seen in the above graph, the activation energy (Ea) necessary to initiate the reaction is much less in the presence of the catalyst than in its absence.

It is this lowering of activation energy barrier by enzyme catalysts that makes possible most of the chemical reactions in life.

By contrast to non-protein catalyst (e.g. H+, OH –, or metal ions) each enzyme catalyze a small number of reactions, frequently only one and thus enzymes are reaction –specific catalysts.

Most inorganic catalysts are relatively non specific for example platinum, often used to catalyze the formation of water from hydrogen gas and oxygen gas.

Will catalyze almost any reaction in which H2 is one of the reactants and the reaction of materials as well.

They generally work fast than inorganic catalysts and greatly lower the activation energy.

Enzymes are not consumed by the reaction they catalyze i.e. a given molecule of an enzyme can be used indefinitely if the conditions are kept suitable.

Enzymes can work in either direction i.e. catalyze reversible reactions.

This is due to the fact that metabolic reactions are reversible and the direction of the reaction depends on the relative amount of substrates and products present.

Enzymes are denatured by excess heat (temperature) by the virtue of their proteineous nature.

Enzymes are sensitive to pH.

Every enzyme has its own range of pH at which it functions effectively.

Enzymes are specific in the action they catalyze.

Normally a given enzyme will catalyze only one reaction or one type of reaction.

Enzymes react in only small amount.

A very small amount of catalyst will transfer in a very large amount of reactants.

They are colloidal in nature and thus provide large surface area for reaction to take place.

Enzyme activity can be accelerated or inhibited.

The accelerators are called activators

NATURE AND MODES OF ENZYME ACTIVITY.

Hypothesis explains the nature and mode of enzyme activity.

The lock and key theory (hypothesis) by Fischer.

In the model the three dimensional configuration of the enzyme represented the lock (the active title) into which particular substrate (key) will fit.

The active site presumes to be rigid.

The induced fit model by Koshland.

An essential feature is the flexibility of the region of the active site.

In this mode, the substrate induce the conformation change in an enzyme just like the shape of a glove is affected hand wearing.

Enzymes are either composed of;

The protein part of an enzyme is called Apanzyme.

The protein part of an enzyme is made up of enzyme protein zymoprotein.

The two component (the apoenzyme and coenzymes) make up the active enzymes called holloenzymes.

This is also a non-protein part, the well known co-enzyme are those which function as hydrogen carriers, inoxidation-reduction in energy metabolism.

For instance coenzyme NAD, NADP, Q, A. Coenzyme A is involved in transfer of an acetyl group.

These are substances which increase the activity of the halo enzymes.

Their absence may retard the catalytic activity of the enzymes or preventing it from acting.

Coenzymes and activators are needed by the enzymes for proper activities.

The velocity of many biological reactions roughly doubles with a 100C rise in temperature ( Q10 = 2) and is halved if the temperature is decreased by 100C.

Many physiological processes e.g. the rate of contraction of an exercised heart- consequently exhibit Q10 of about 2.

When the rate of enzyme catalyzed reaction is measured at several temperature the result shows in the figure below is typical.

There is an optimal temperature which the reaction is most rapid.

Above this reaction the rate decrease sharply due to heat denaturation of the enzyme and below this the energy content of enzymes is too low to make them participate in their reaction.

Fig. enzymes activity as a function of temperature. 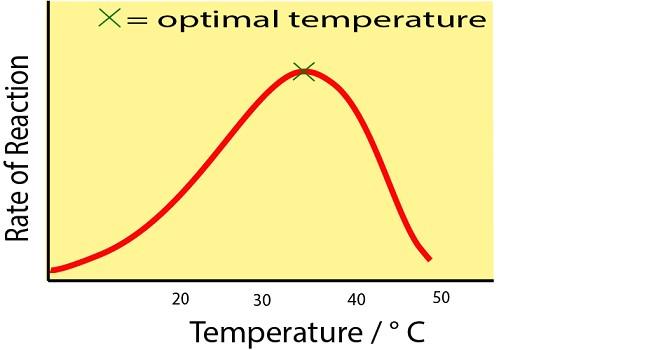 Although temperature sensitivity varies somewhat from one enzyme to another the curve shown here may be taken as applying to an average enzyme.

Its activity rises steadily with temperature (approximately) doubling for each 100C increase until thermal denaturation cause a sudden sharp decline, beginning between 400C and 450C.

The enzyme because completely ineffective/ inactive at temperature above 600C presumably because its three dimensional configuration has been severely disrupted.

Denaturation of a protein enzyme by heat is the loss of it biological activity.

This can be done also by heat, acid or high salt concentration.

Moderate pH changes affect the ionic state of the enzyme and frequently that of the substrate also.

However the few enzymes eg pepsin is active at pH values well outside this range.

The shape of pH activity curves is determined by the following factors. 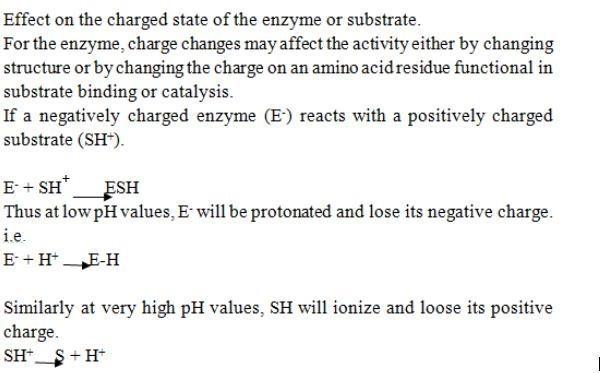 1. Since the only forms that will interact are SH+ and E–.

Extreme pH values will lower the effective concentrations of E– and SH+ thus lowering the reaction velocity as shown below. 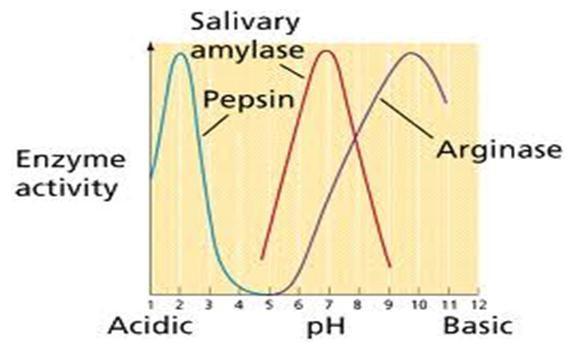